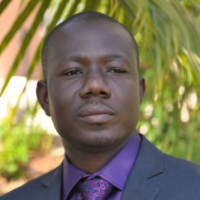 Accuracy of a Plasmodium falciparum specific histidine-rich protein 2 rapid diagnostic test in the context of the presence of non-malaria fevers, prior anti-malarial use and seasonal malaria transmission

Can clinical signs or symptoms combined with basic hematology data be used to predict the presence of bacterial infections in febrile children under - 5 years?

Increase in the prevalence of mutations associated with sulfadoxine–pyrimethamine resistance in Plasmodium falciparum isolates collected from early to late pregnancy in Nanoro, Burkina Faso

Antigen persistence of rapid diagnostic tests in pregnant women in Nanoro, Burkina Faso, and the implications for the diagnosis of malaria in pregnancy.

Implementation of a malaria rapid diagnostic test in a rural setting of Nanoro, Burkina Faso: from expectation to reality

The impact of clinical research activities on communities in rural Africa: the development of the Clinical Research Unit of Nanoro (CRUN) in Burkina Faso.

Authors:
Date:
2014-03-22
Journal:
Malaria journal
Content:
BACKGROUND: The opportunities for developing new drugs and vaccines for malaria control look brighter now than ten years ago. However, there are few places in sub-Saharan Africa with the necessary infrastructure and expertise to support such research in compliance to international standards of clinical research (ICH-GCP). The Clinical Research Unit of Nanoro (CRUN) was founded in 2008 to provide a much-needed GCP-compliant clinical trial platform for an imminent large-scale Phase 3 malaria vaccine trial. A dynamic approach was used that entailed developing the required infrastructure and human resources, while engaging local communities in the process as key stakeholders. This provided a better understanding and ownership of the research activities by the local population. CASE DESCRIPTION: Within five years (2008-2013), the CRUN set up a fully and well-equipped GCP-compliant clinical trial research facility, which enabled to attract 25 grants. The research team grew from ten health workers prior to 2008 to 254 in 2013. A Health and Demographic Surveillance System (HDSS), which covers a total population of about 60,000 people in 24 villages was set up in the district. The local community contributed to the development of the facility through the leadership of the king and the mayor of Nanoro. As a result of their active advocacy, the government extended the national electrical grid to the new research center, and later to the entire village. This produced a positive impact on the community's quality of life. The quality of health care improved substantially, due to the creation of more elaborate clinical laboratory services and the acquisition of state-of-the-art equipment. CONCLUSION: Involving the community in the key steps of establishing the centre provided the foundation for what was to become the CRUN success story. This experience demonstrates that when clinical trials research sites are carefully developed and implemented, they can have a positive and powerful impact on local communities in resource-poor settings, well beyond the task of generating expected study data.
Identifiers:
PMID: 24655351
PMC: PMC3994337
DOI: 10.1186/1475-2875-13-113

Immune response to the hepatitis B antigen in the RTS,S/AS01 malaria vaccine, and co-administration with pneumococcal conjugate and rotavirus vaccines in African children: A randomized controlled trial

Efficacy and safety of RTS,S/AS01 malaria vaccine with or without a booster dose in infants and children in Africa: final results of a phase 3, individually randomised, controlled trial